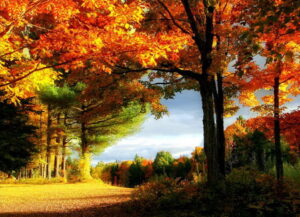 Never has nature played such a big part in our wellbeing than over the last 18 months. When there was nothing else to do, nature was still out there waiting to care for us. Just a walk through the fields or a stroll along the beach can awaken the innermost feelings of happiness and peace, and Environmental Psychology has gone a long way in proving this fact.

Study identifies amount of time we need in nature
In a study of 20,000 people, a team led by Matthew White from the European Centre for Environment & Human Health at the University of Exeter, found that people who spent two hours a week in green spaces, local parks or other natural environments, either all at once or spaced over several visits were substantially more likely to report good health and psychological wellbeing than those who don’t. Two hours was a hard boundary: The study, published last June, showed there were no benefits for people who didn’t meet that threshold.

“It’s well known that getting outdoors in nature can be good for people’s health and well-being, but until now we’ve not been able to say how much is enough,” White said. “Two hours a week is hopefully a realistic target for many people, especially given that it can be spread over an entire week to get the benefit”

The study by White and his colleagues is only the latest in a rapidly expanding area of research that finds nature has robust effects on people’s health — physically, mentally, and emotionally.

Our affinity toward nature is genetic and deep-rooted in evolution. For example, have you ever wondered why most people prefer to book accommodations that have a great view from the balcony or the terrace? Why patients who get a natural view from their hospital bed recover sooner than others? Or why does it happen that when stress takes a toll on our mind, we crave for time to figure out things amidst nature?

Author Richard Louv mentioned ‘Nature-Deficit Disorder’ in his famous book ‘Last Child In The Woods.’ According to Louv, nature-deficit disorder is not the presence of an anomaly in the brain; it is the loss of connection of humans to their natural environment. Staying close to nature improves physical, mental, and spiritual well-being. It makes us feel alive from the inside, and we should not compromise it for recent developments like urbanization, technology, or social media.”
Let’s take a look at what it does for our mind and body.

Reduces stress levels
Being outdoors has been found to reduce the levels of cortisol, the stress hormone. One study found participants who walked in forests exhibited significantly lower heart rates, better moods and less anxiety than individuals who took the same walk in an urban setting. In addition, research found that sounds of nature help us to relax and feel calmer.

Improves sleep
Exposure to natural light boosts our mood and keeps our circadian rhythm, or body clock, in balance. Research shows that the amount of sunlight you get during the day has a big influence on how much sleep we get at night. A lack of sunlight has also been shown to affect the production of hormones melatonin and serotonin.

Increases endorphins
Physical activity – even something very gentle like a light walk – pumps up your endorphins (your brain’s feel-good neurotransmitters), giving your wellbeing an instant boost, and what better place to get your heart-rate up than in the great outdoors? Taking a walk, cycling or gardening will all boost your mood and sense of wellbeing.